Plastic To-Go Cups Are Ruining Our Oceans. These Cups Are The Answer.

*This post is sponsored by our friends at Shamrock Cups. The information and opinions presented are here are all ours.

It’s hard to imagine a world without plastic. It’s quite literally everywhere and used in just about everything from food storage and packaging, to things like bicycle helmets, toys, cell phones, computers to making cars, building materials for homes, commercial fishing equipment and so much more. What was once considered a technological advance, pollution from plastic is now a global crisis taking a serious toll on every ocean and waterway on our planet.

According to the EPA, plastic is so incredibly indestructible that “every bit of plastic ever made still exists.” It can take hundreds to thousands of years to break down. This is what makes it so efficient and at the same time incredibly dangerous. Each year 8 to 9 million tons of plastic finds its way into the world’s oceans and it’s been reported that by the year 2050 the amount of plastic in the sea will outnumber the amount of fish. One of the largest concentrations of plastic pollution can be found swirling in the Pacific Ocean. Named the Great Pacific Garbage patch, this vast area of swirling plastic pollution is exponentially growing. It is now more than twice the size of Texas and estimated to weigh 87,000 tons, filled with more than 1.8 trillion pieces of plastic. (2)

It’s when the plastic like those from plastic cups breaks down into much smaller pieces from waves, heat and sun exposure when it becomes an even bigger issue. These tiny plastic bits and pieces called “microplastics” aren’t filtered out by wastewater treatments. They’re washing up on beaches and have even been discovered in rain in remote mountain areas like the Great Pyrenees of France. Microplastics are being absorbed and accidentally ingested by sea life when they are mistaken for food. They’ve been discovered inside the brains of crabs, the stomachs of fish and birds and other mammals often causing death, starvation and suffering. Microplastics have even been shown to alter endocrine function and healthy development in fish and other aquatic life. Scientists know for sure that microplastics are harmful to marine life and ecosystems, but aren’t certain what the true impact will be on humans quite yet. But it won’t be long before we find out. These bits of plastic pollution are such a problem that a recent study done at the University of Newcastle in Australia found that most of us are ingesting the equivalent weight in plastic as a credit card each week.

One of the most devastating sources of plastic pollution is single source plastics like the bags, forks, straws and cups like that we’d get at a fast food restaurant. And that plastic cup you threw into the garbage after a quick casual lunch on the go isn’t just harmlessly sitting in a landfill. Even if you don’t live near the ocean, that plastic to-go cup you threw out today will eventually release harmful contaminants and toxins that seep into our drinking water that makes its way into rivers, lakes, streams, oceans, drinking water and into our food from land or sea.

Disturbing Plastic Fact: Only 9% of all plastic is recycled worldwide. Of the one trillion plastic bags that are used each year globally,  less than 5 percent are recycled. 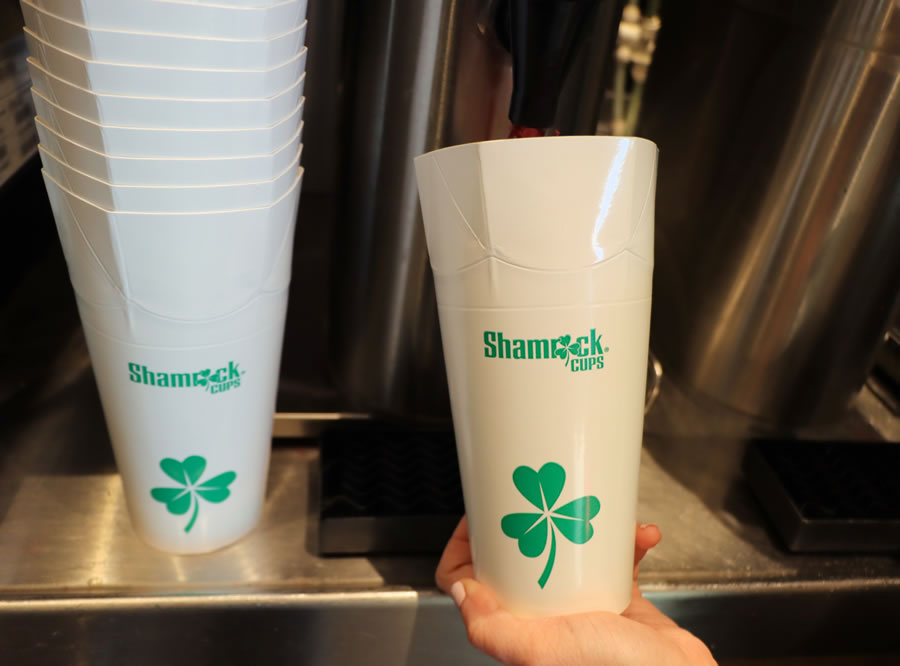 What Can Help Solve The Plastic Problem?

One of the largest sources of plastic pollution is single use plastics like the plastic cups, lids and straws dispensed from fast food restaurants and convenient stores. And with over 500 billion plastic cups used every year an eco-friendly alternative can make a big impact in the health of our oceans.

A company called Shamrock Cups has an innovative solution that they believe can eliminate the need for single-use plastic cups and positively change the way we take our drinks to go forever. They’ve invented the Shamrock Cup – a paper cup with a foldable built-in lid shaped just like a four-leaf clover. It’s kind of genius. 100% recyclable and biodegradable, these cups even have a slot for a straw (paper only of course!). Shamrock Cups offer the convenience of plastic or styrofoam, without all the nasty negative environmental effects.

How Does A Shamrock Cup Work?

What Can We Do To Help?

Plastic pollution on land and in our oceans is going to need more than one solution to tackle it. Not only will it revolve around our individual habits and actions, but it will also require a change in business practices and the enactment of government policies.  If you’re feeling helpless, there are small but powerful actions you can take to make a difference. Small changes can lead to big results. Here’s how to help:

Anytime you’re offered single-use plastics that you do not need just say no. This includes plastic cups, lids, straws, plastic bags, containers, and takeout utensils. This means less plastic floating in the ocean.

While we know this isn’t always possible or mainstream yet, an awesome product like Shamrock Cups is an innovative solution that can fill the gap for businesses that need to offer an environmentally friendly but convenient take-away solution.

It’s the old power of the purse. Let the fast-food companies and the businesses where you’re spending money know that using single-use plastics is not okay. If companies feel their bottom line is being affected because their customers disapprove of their business practices they’ll be certain to make a change. So next time you refuse that plastic cup also let that fast-food place or business know Shamrock Cups are a way better solution

Impactful change requires government action. Since it’s the Environmental Protection Agency’s job to make rules to protect the environment, it’s time they got involved. Drop them an email,  send them a Facebook message, call them on the phone or write them an old fashioned letter. Tell the EPA that you want them to write rules to ban plastic cups and lids so they never have a chance to reach the ocean. Suggest compostable, ocean-friendly solutions like Shamrock Cups as a way better solution. 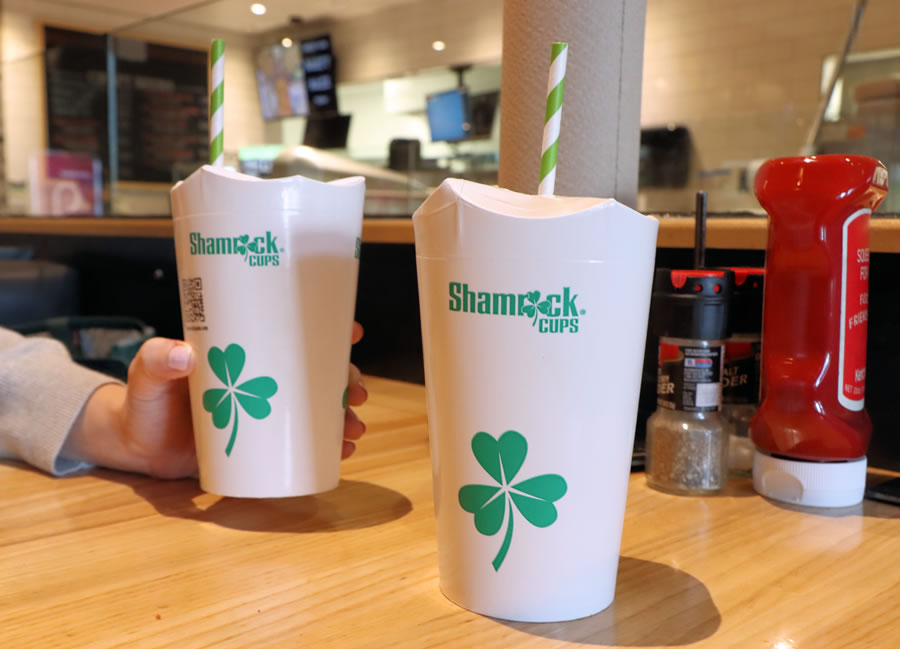 Want To Help Fight Plastic Pollution In Our Oceans? Shamrock Cups Needs You To Help Spread The Word!

With a Shamrock Cup there’s no excuse for any single-use plastic cup or lid to be used in the fast food industry anymore.

To learn more about Shamrock Cups and to join the petition to help eliminate over 100 million pounds of plastic waste every year visit  http://shamrockcupsinc.com/help-us-change-the-world-with-shamrock-cups/ 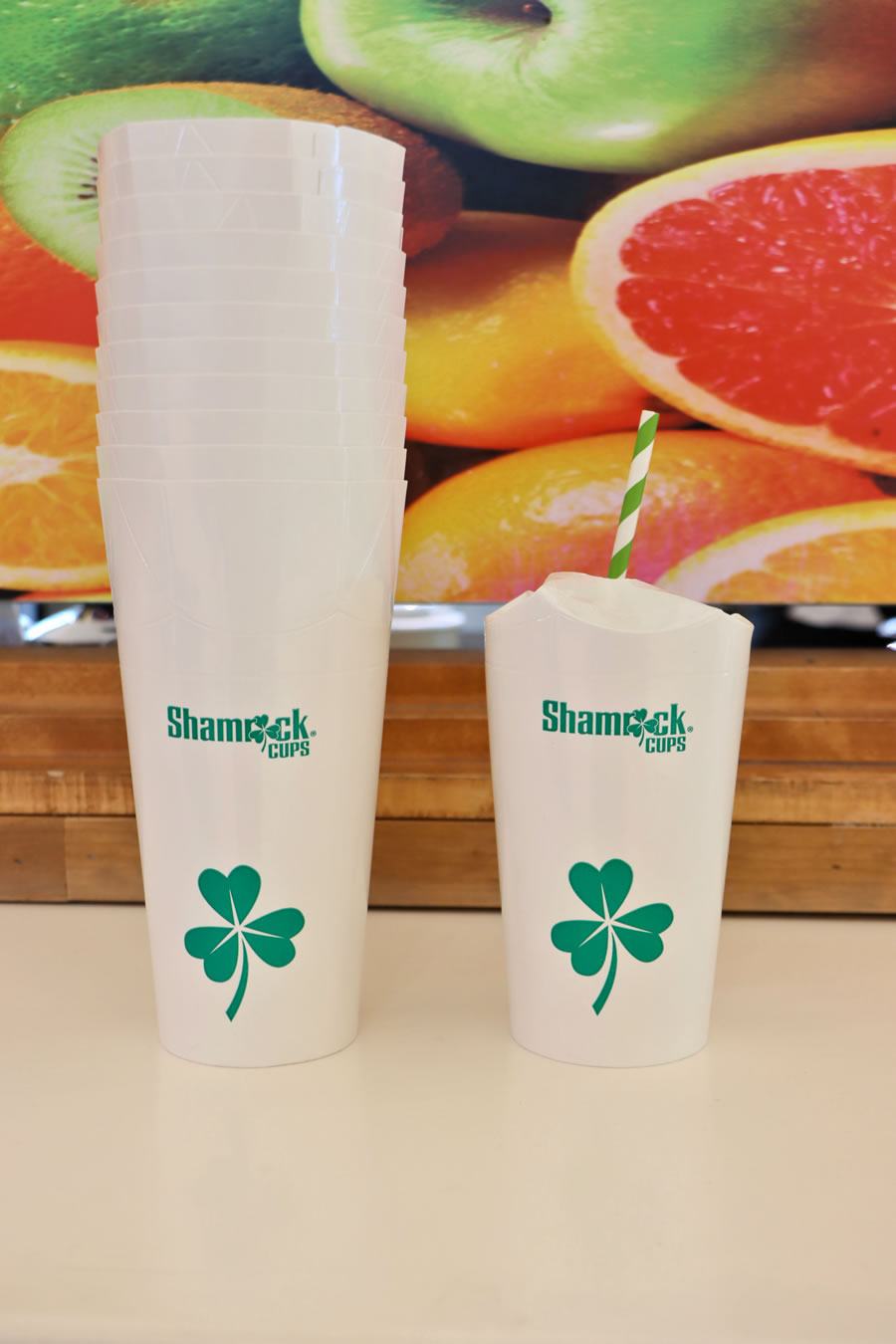