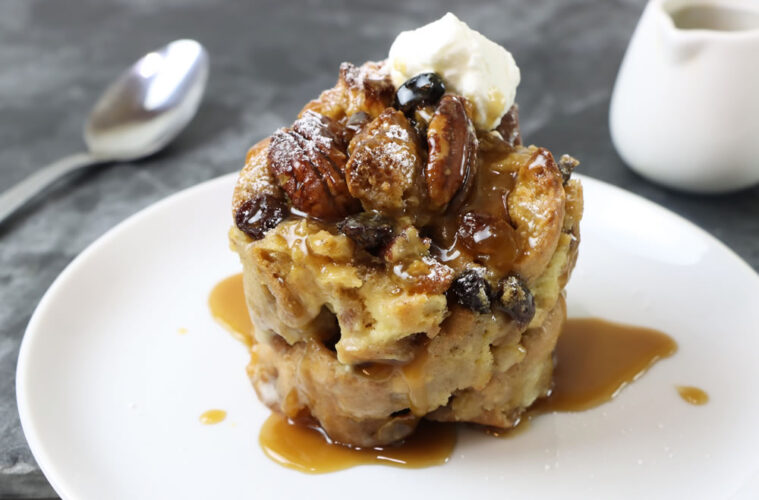 As it became more popular over the years, many people started eating gluten-free to score some cool benefits like weight loss and a boost in energy. But not everyone is eating gluten-free because it’s the next health trend to try out. Those with a diagnosed gluten sensitivity or celiac disease know that following a strict gluten-free diet is the only way to help ease painful symptoms and stave off damage to their bodies that can be caused by gluten.

For the gluten intolerant, to stay healthy and get the most out of a gluten-free diet there’s no cheating allowed. Once you’ve learned to read labels and you get in your gluten-free groove at home this usually isn’t too much of an issue. But eating out, going to parties, and even traveling can prove challenging when you’re worried about cross-contamination from other gluten-containing foods or just having an option available. One study even found that about 21% of those with celiac disease feel they have to skip social outings in order to stick to their diet. But with a little planning, it can be easy to stay gluten-free without having to risk getting sick or skip anything social.

Here are a few tips to try to help you stay gluten-free while you’re eating out or traveling:

Watch Out For Condiments:  Sauces like soy sauce, teriyaki sauce, hoisin sauce, and salad dressings can be hidden sources of gluten. When in doubt check the label or ask the chef.

Do Some Research If You’re Traveling: There’s nothing worse than traveling hungry! Research places with gluten-free options to eat and shop before you go. And if you’re traveling somewhere you might have trouble with the language, consider translating and writing down your dietary needs to bring with you.

Enjoy A Cocktail : Beer, which is made from fermented wheat, is a no-no on a gluten-free diet. But hard cider is a great gluten-free alternative made from apple cider. But according to beyondceliac.org, “pure, distilled liquor, even if made from wheat, barley, or rye, is considered gluten-free. Most liquors are safe for people with celiac disease because of the distillation process. However, be on the lookout for hidden gluten in liquors that add flavorings or other additives after distillation. There is also a risk for gluten cross-contamination in facilities that process products containing wheat, barley, or rye.”  Some gluten-free liquors include bourbon, whiskey, tequila, vodka, gin, rum and cognac. Wine is also generally considered to be gluten-free and safe for celiacs.

Always Pack Some Snacks: When you’re out and about, always have some gluten-free snacks on hand. A piece of fresh fruit or some jerky stashed in your bag can be a lifesaver when you’re in a pinch and there’s nothing gluten-free around.

Bring Some Gluten-Free Foods With You:  If you’re going to a party or gathering at a family or friend’s house, bring along some foods like gluten-free bread, crackers, or pasta so you won’t feel left out while everyone else is enjoying their food.  Schär is a gluten-free company that has a large selection of crackers and breads that taste just like the real thing. Consider bringing some prepared gluten-free dishes with you to share with other guests. 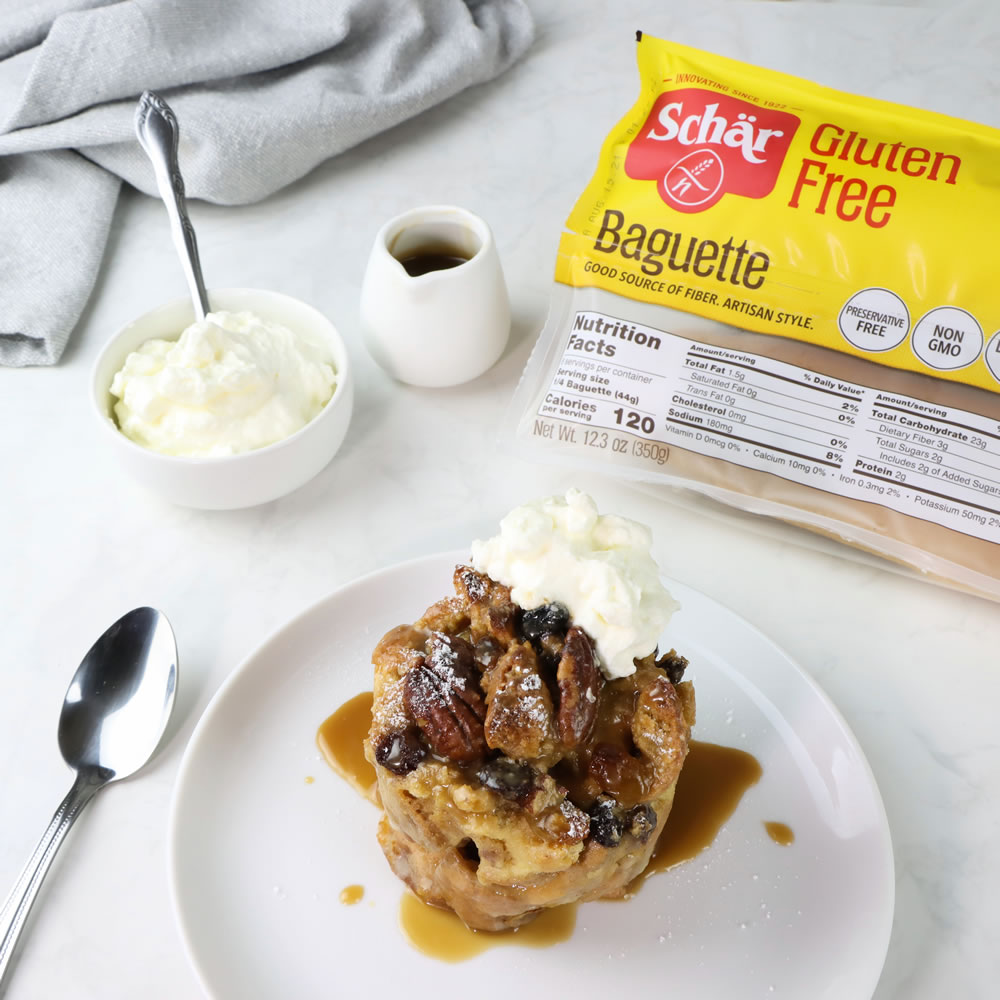 Even with tons of prep and research, you may not always be able to find gluten-free options for some of your favorite dishes and desserts. And one of ours? Bread pudding. If you’re looking for an indulgent, yet delicious gluten-free dessert to bring to your next gathering try this Easy Gluten-Free Bread Pudding made with Schär Gluten-Free Baguettes. 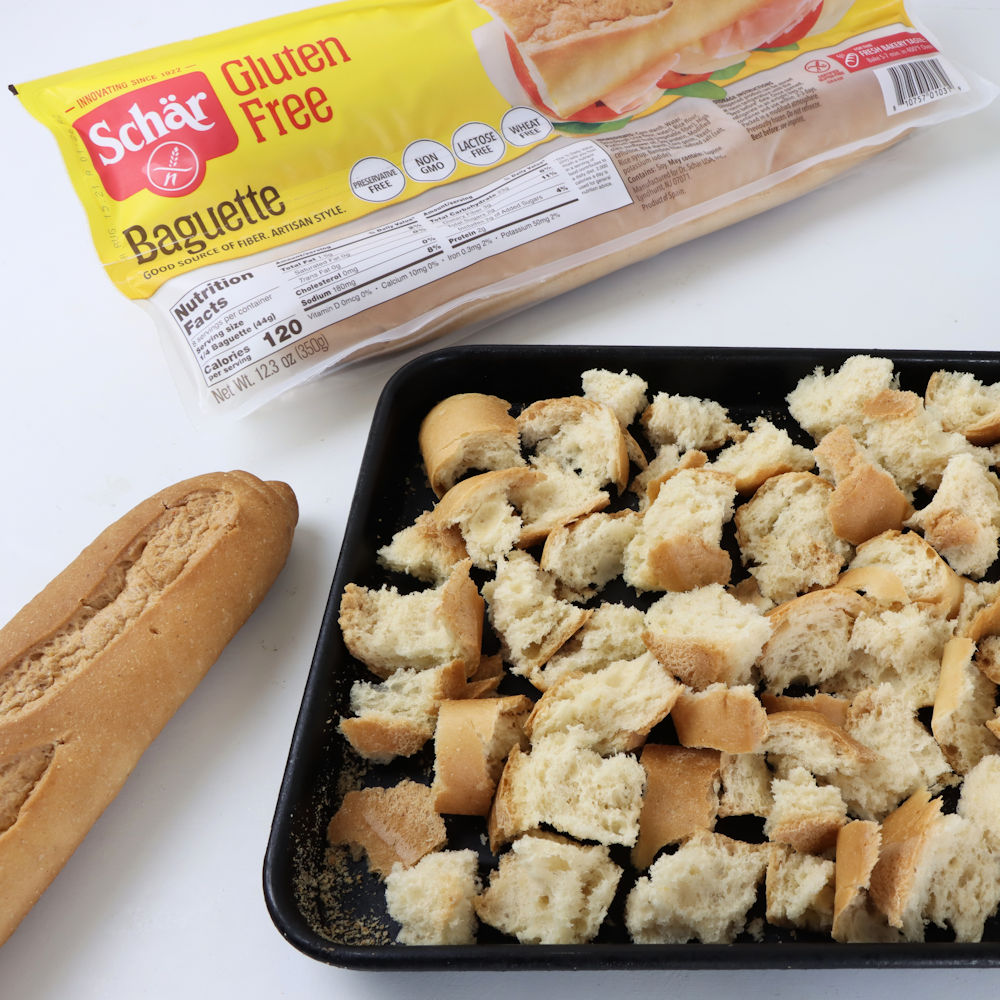 How to Make The Gluten-Free Bread Pudding

Toast the Bread: Bread pudding is best made with day-old bread, but if your bread is still fresh, start by cutting it into 1-inch cubes. Place them on a baking sheet and pop them in the oven at 350 degrees for about 15 minutes or until the bread is very lightly toasted. Toss and flip them halfway through to toast all sides. Once done, take them out of the oven to cool.

Warm your Milk: To keep the custard from curdling or separating, gently warm your milk in a small saucepan with the butter and heat until just below a simmer. Remove from heat and allow to cool.

Make the Custard: While the bread is toasting, make your custard by mixing your eggs, milk, sugar, vanilla, and spices like cinnamon and nutmeg until fully blended and smooth. To get them super smooth with minimal effort, throw them all in the blender instead. 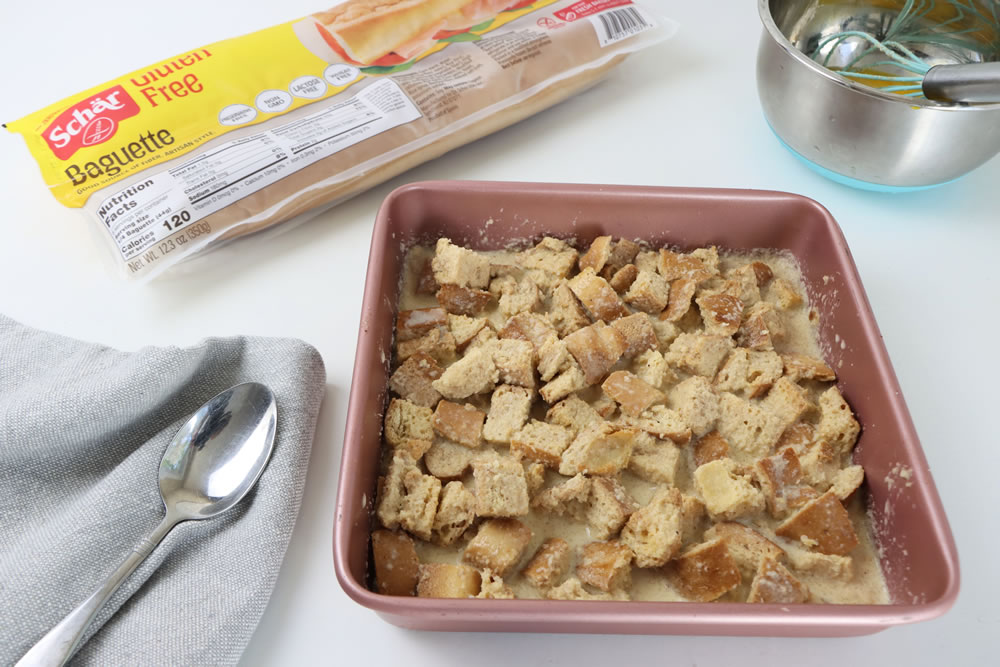 Soak the Bread: Place your bread cubes in a greased baking dish about 8X8 with your pecan and raisins (if using). Then pour the custard (egg milk mixture) over the bread cubes. Gently toss and allow them to sit in the fridge and chill for about 30 minutes or even overnight so they can soak up all the yummy sweet custardy liquid.  Bake them in the same dish or pan, or transfer the bread pudding to 4 to 6 individual ramekins to bake as we did. 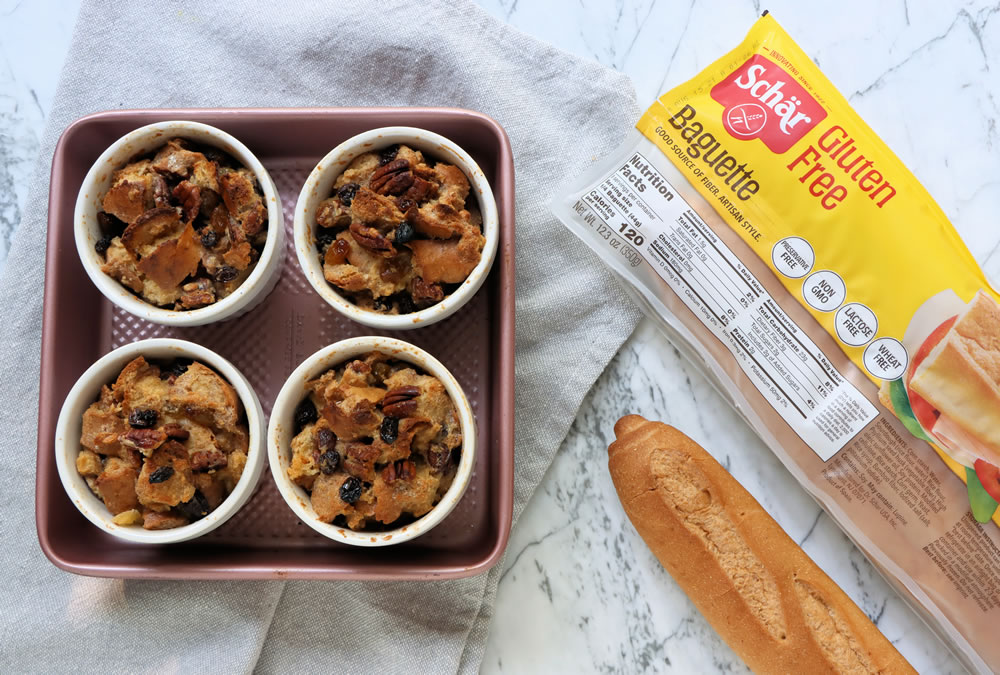 Bake Until Just Set:  Bake the bread pudding at 350 degrees for 45 minutes. In the pan, it should be golden brown on top and jiggle slightly. If using an instant-read thermometer, it will be done at 160°F and should bake in about 40 minutes uncovered or 15-20 minutes in ramekins. Note: Since ramekins are smaller it can be hard to see a jiggle. Be careful not to overbake.

To Serve: Allow the Bread Pudding to cool for about 10 minutes. Then serve with whipped cream or drizzle with some delicious brown sugar whiskey sauce (recipe below). 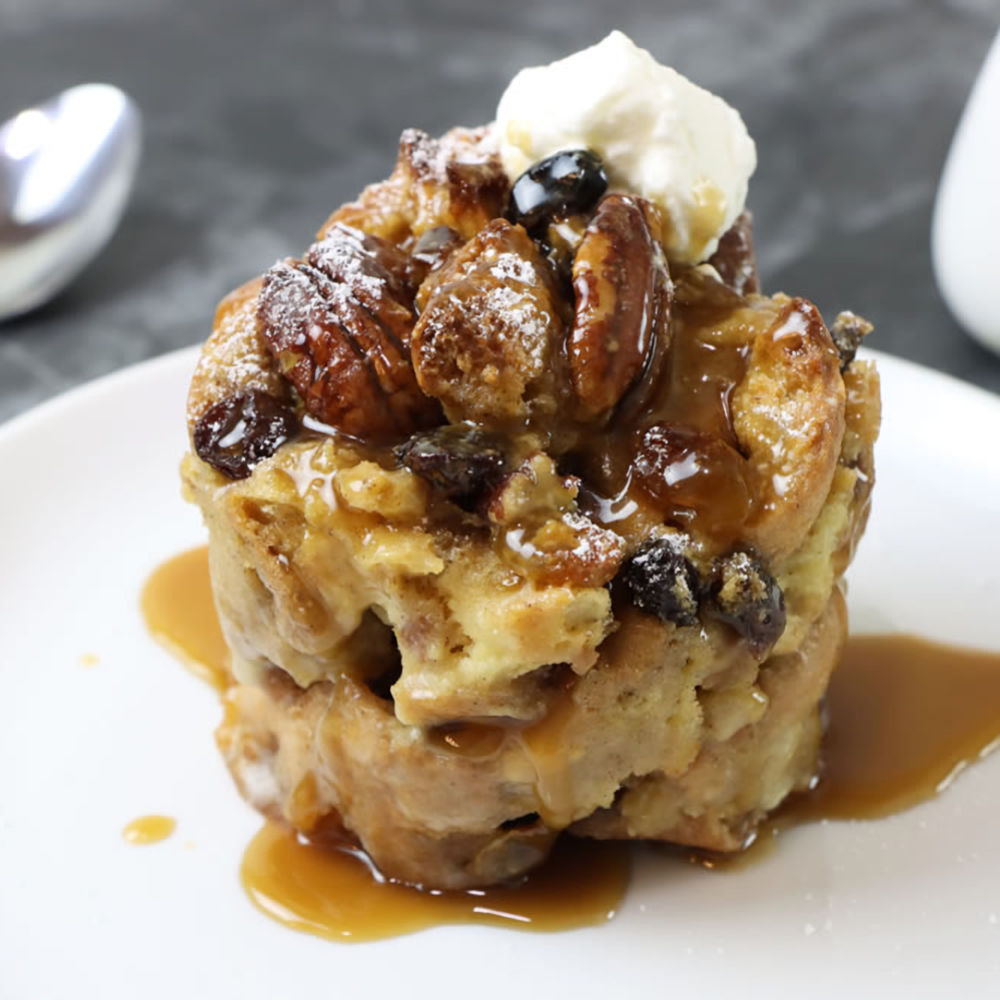 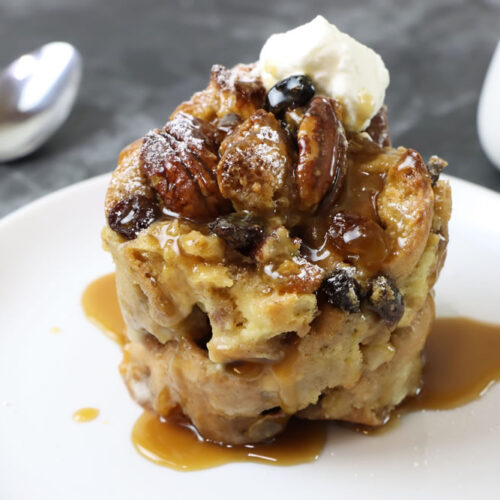 Keyword dessert, easy, gluten-free
Tried this recipe?Let us know how it was! 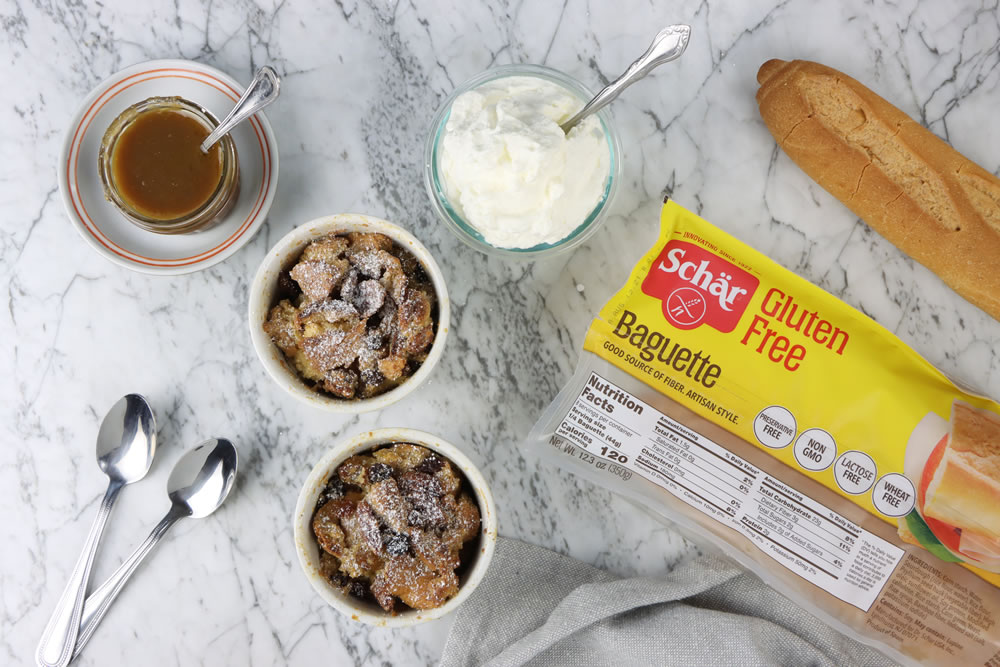